My little contribution to the OWS movement 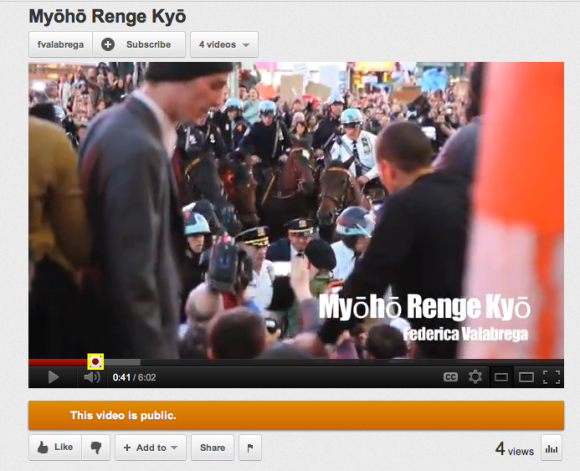 Myōhō Renge Kyō is the Lotus Sutra and the purpose of chanting this Mantra is to awaken the soul so that it will be able to fight against the daimoku, a Japanese demon that stands in the way of man and Buddha.

I titled my video this way because when I first walked down to Wall street the very first people I met were the Japanese monks circling the perimeter of Zuccotti Park chanting this mantra as if they were trying to bless the territory. It was such beautiful and peaceful sight to see. In the middle there was chaos and yet it was contained by these three monks walking around in circles repeatedly to keep calm and protect the protesters and their ideals.

I wanted to show this side of Occupy Wall Street in my video.
I wanted to show the tents, the sleeping bags, the circle of musicians singing on the top of their longs “we are the 99%,” I wanted to show all the calls for “mic check,” the food bank and the clothing swap, the beautiful artwork and the political debates. But I wanted to do it with that same peaceful touch those Japanese monks showed me during my week of filming.

Why? Because behind any revolution there is a peaceful intent, it’s not all about the range and the fight, the final intent is that all will get along. This video is a contribution to that hopeful feeling behind. The OWS protests and marches to which I took part several times had the peaceful intent of changing the present toward a better future.

May this video as many other contributions help keep that a reality alive not only for the OWS movement, but also for the many others to come and go because the organization of the masses toward a rigid and unfair government is the only real weapon we have to defend Democracy, and we, as the people, should exercise this power anytime we feel threatened.