she sings. I cry. 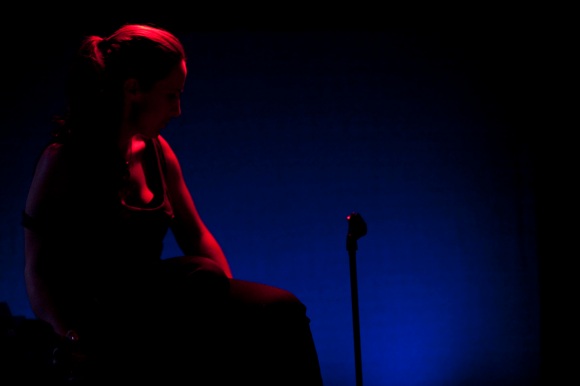 She unties her hair. She gently passes her finger through it, stroking it as if she was playing with herself. She goes down and then up again. Down and up. But she says she is on the Up and Up of life and I believe her.
Her lips are red, her nail polish too and she is trying to seduce us, or so she says when she steps up the Cabaret stage talking about sex and…maybe a bit about love.

I have known Cate since the time she used to go by as Casey. We were 21 and our afternoons were spent talking about life, philosophy and boys by a fireplace in a run-down basement apartment on Baseline and 16th street in Boulder, Colorado where we both went to college. Red wine was a must and our friend Lizzie, the mature one of the group, was the goal keeper. Almost ten years later, we find ourselves with parallel lives in New York City: She, the Cabaret singer, me the freelance photojournalist. When she was to become a personal counselor and I was supposed to be the doctor in the family.

But, the beauty of it all, we are as happy as one could be knowing that the lives we had chosen were indeed not fit for us, but just conformed to what we thought we were made of, without knowing so much more.

I was invited to photograph Cate on stage during a dress rehearsal she hosted a couple of weeks ago. I had photograph Cate before during a live performance, but I could not really move around in the room much. This time I could clim on chairs, tables and even go on stage next to her. I rarely have so much fun as I had that Thursday morning. And yes, I cried when Cate sang “Mama says, you can’t hurry love, love will come easy it’s a game of give and take…” and I do not feel cheesy about, I just feel incredibly lucky to have the coolest job in the world and to enjoy every bit of it daily!

ps: Her full name is Cate Cox and she has been performing live at the Duplex for a few months…but expect sometime more coming up very soon!

One thought on “she sings. I cry.”