…and finally today this happened to me.

I woke up with a sense today was going to be a HOT day for news.
And, little did I know at about 11:30 am, my roommate and starting seeing helicopters flying by from the 29th floor of our building. We looked down and the streets around our house looked all backed-up for no reasons. The News on TV were quiet. There was only one thing I could have done to calm my curiosity: Get out with my camera and shoot. 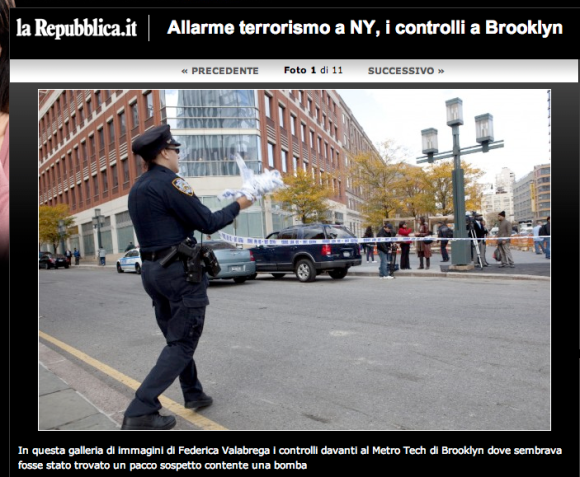 So, I went downstairs and started chatting with my neighbors. One thing led to the other, they said there was “supposedly a bomb in a package sent from terrorist from the Yemen to the USA” and that the package was found in a UPS track that stopped at Metro Tech, three blocks from our house.
There is something about danger that tickles every news reporter I know.

I am no the exception. I had to go see it for myself. I had to go take some photos.
Bomb or not, I left with camera at hand.

Flatbush Avenue was entirely blocked and firefighters and policemen were showing up from everywhere.
The “Do not Cross” tapes were hung from side to side of the JP Morgan building in the Metro Tech area and reporters were lined-up behind the tapes (it did not take long until I cross that and got yelled at for it!)

The photos you see published below are what I saw in those 30 minutes I was there to witness confusion that could have turned out to be lethal, but, for once, for me, it was just another day on the most exciting job I know.

The package was later found in the UPS track and it did not contain a bomb of any sort and, although it came from Yemen, it was only a terrorist scare for all of us, nothing more.