Last Saturday, I took a chance. I dove into Crown Heights the heart of the Chassidic Jews of Brooklyn to take photos. I came out a different person. Although a bit uneasy and aloof at first, by the end I was dancing and singing with my co-religionals even though I wasn’t wearing neither a skirt nor a wig. And I was not so keen in staying still in the women partition.

I am a Sefardi Jew from Rome, one-of-a-kind as someone would say, and that is NOT due to my sassy personality, but more to the religious mix of blood running through my veins. I was raised in a modest Jewish Italian home with it’s own generational traditions of a non-Jewish mother and a semi-religious Jewish father. I did not celebrate Shabbat all the time, grandma and I did not bake the Challah every Friday night. I did not give-up pork and shelf-fish until I was 14 really.
Nonetheless, I have always felt a strong identity as a Jew. If not to the Tora, to the common beliefs my people shared: Individual strengths, respect for the self and the others and encouraged individual and socialized questioning and growth.

But, as a 27-year old female, my religious pillars are not as strong as they were when I was a child and questioning was not a possibility. I am Jewish by blood, Jewish by belief, but more often than not sometimes I feel lost in my own knowledge of what makes me Jewish.
This is why, since I moved to Brooklyn, I have decided to get closer to “my people” and try to understand what I am starting to question the best way I know how: With my camera.
Last Saturday was the first experiment for this bigger project I will be working on for the next two months: Analyzing and explaining the role of the women in the Orthodox Jewish community in New York City.

I have been building connections with the Chassidim for only a couple of weeks. I wanted to make sure they were going to allow me access for my project the best they could. But, when I first saw the partition between men and their wives at the Lag Baomer bonfire the other night, I immediately felt as if my idea of ” gaining access” was not going to be as easy as I thought.
I am used to the divide in synagogue, I am used to it, but I am not entirely ok with it and I am not sure I will ever be. In any case, it was not for me to judge such religious rule. I was there to take photos of the fest and to portray the happiness of such moment of Jewish pride. And this I did.

Yet, the divide affected me more than it should have. It impeded me to do my job the best I could. With the fence up, I was not going to be able to go close to the fire to take the best photos because “labeled as a woman” and the fire was in the men’s section.
But, after hours of sneaking in and out the men’s divide, despite a number of “suggestive” notices from the main event organizer, I succeeded in my intent by making friend (not a usual task) with one of the main Rabbi around the community who told me to do my job the best I could despite it all.

Did the Rabbi really tell me to go ahead and ignore what the rest of the people had been telling me for hours?
Go inside the men’s area and forget about it! I was in. I was happy. I was accepted as a female photographer and nobody could deny it.
I felt as if the “weirdness” of the initial impact with the tight community dissipated. I was a “stranger among them” still, but they did not look at me with demeaning looks. They respected me for who I was: A dedicated Jewish photographer despite the missing wig an skirt! Dancing and singing with them came soon after. 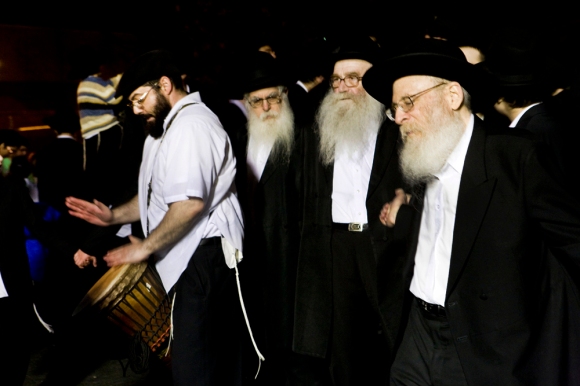