St. Patty by night at Mimi’s 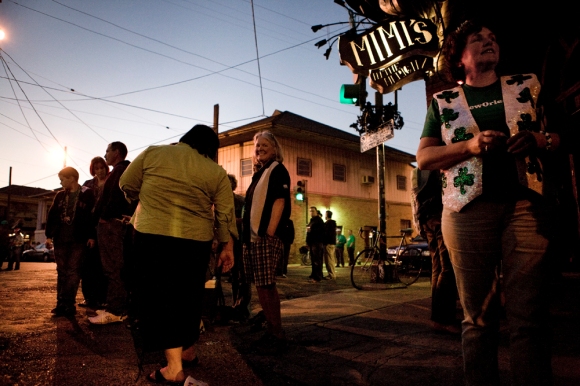 Of course, I am not Irish, but “it’s is a truth universally acknowledge that a ‘photographer in need of photos’ and in possession of a good ‘inspiration,’ must be in want of a ‘parade.'”
So yesterday, the world-renowened Green Day Fest, also known as St. Patty’s Day, I took advantage of the beautiful sunset to venture in the core of the Marigny, the hipster side of town, what my fellow friend and photography mentor Chris also likes to refer to as the “Williamsburg of Nola.”
Needless is to say my idea of hanging out in front of “Mimi’s” (the bar to be if you are ever in the area) wasn’t of the most original since the whole town seemed to have preferred that same spot to the chaos of the French Quarter to watch the Irish Club parading by.

Oh, well. “When you can’t beat them, just surprised them!” And this is what I did. Sneaking behind people before they could see me and pose for me. This is also one of the two reasons why I chose to go flash-less: I wanted the crowd to give me what they got before they saw my flash-light sensor going off and alerting them of my presence. Plus, the wonderful dusk-like light draw me to experiment turning off my flash to create a “more dramatic and somber” sort-of atmosphere. The lady with the white vest with the green four-leave clovers, standing on the side of bar is expecting someone, or maybe something as you can tell from the expression on her face and the flash would have probably made her change such status causing the whole photos to distort its most true meaning-portray reality.

Now, obviously, there are plenty of situations in which the use of a flash, at times in slower sinc with your shutter speed, can indeed give wonderful results and lead to a sharp, and colorful image of a still object while blurring a moving car or a swing dancers (more likely in Nola than anywhere else). But, I guess last night I was just trying experimenting something different and that place where I shot, at the corner of Franklin and Royal, was the perfect combination of traffic lights, street lights, bar lanterns and parade glows to try a flash-less approach.

Now, as you can tell from my early-night photos (at the end of the post) I still found it interesting to use the contrast of the hand-held flash on the side to color the subjects and the afternoon lightly pinkish sky. The couple kissing, I think, was my best attempt. I only wished the whole parade could have started earlier because the sunsetting at the end of Royal street would have been the cherry on the cake for some of these shots, with or without the flash. In the end, though, a guess a good photographer has to learn hot to deals with diverse situations the best she can with the right or wrong light. What’s most important in the end is the subject matter anyhow!

ps: Spoiler Alert: There is ONE photo among those I posted, which is not taken in the Marigny. Guess which one?! 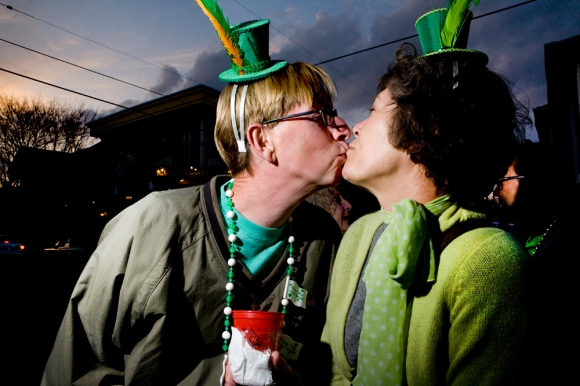 One thought on “St. Patty by night at Mimi’s”