They come out the backstreets of the Treme neighborhood covered head-to-toes in colorful, hand-made, feathered costumes looking to challenge other tribes in their games of ego and peaceful supremacy during the Carnival Day.
This tradition is 225 years old. They are the Black African American who felt a spiritual affinity with the Native Americans Indians.
Their costumes weigh around 80 pounds, but they wear them with so much pride in memory of the dead members of previous Indian gangs, the burden is often soon forgotten.

This scene is very different from the beads-throwing, tourists-screaming one of the French Quarter. The Indians are secretive about when their parades are going to take place and you never know which street they will be coming out from. And when they do, their search for the opposite gang is serious and tireless. So, you better not stand in their way to take a picture or else their heavy costumes may knock your down while they hurry to hunt for the other tribes to challenge.

There are the Spy Boys, the Yellow Pocahontas and the Wild Magnolias among the most well-known.
Running into these gangs during Mardi Gras celebration on the streets was almost scary. I felt the need to stand aside a couple of times and let them do their own celebratory invocations when I was dying to take a photo of their native rituals and dances. 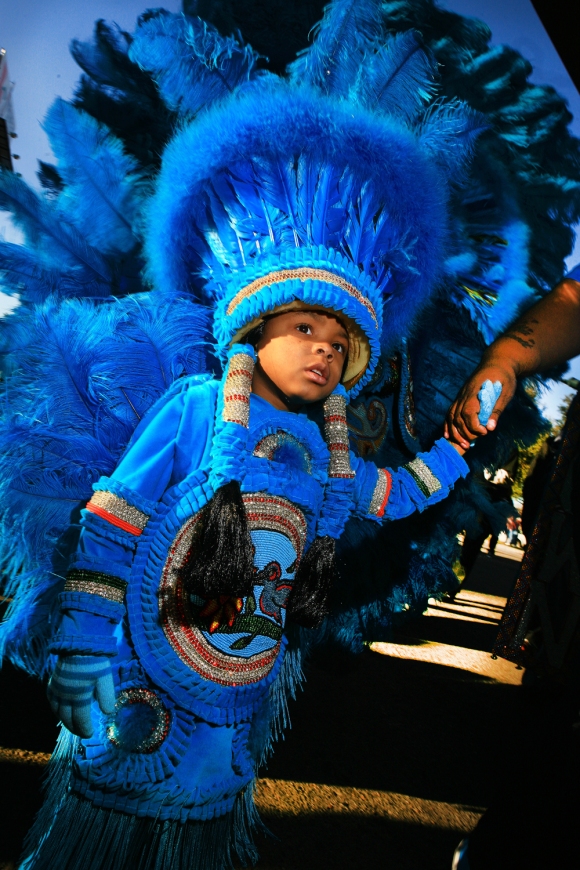 “Let’s go get them,” it was one of the call-and-response chanting of the Spy Boy as a reminiscent of the West African and Caribbean music introduced to New Orleans from slaves came about at the end of the 1800’s.

They repeat the chant accompanied by the beat of percussions and drums stumping around in their full prideful colors looking for some other gang to challenge.

Then if the two tribes meet, they dance in circles around one another. They challenge the opposite gang to show them off what they have going for them and then they offer some of their own fascinating traditions of tribal dances.

The Indian Mardi Gras is a second line tradition. It’s is less well-known among tourists and visitors and unless you have lived in New Orleans for a while or read about it, you may never run into them and  you will miss the thrilling experience . I am very glad I did.

For most of the natives, this tradition is engraved in the family lineages even though most of these Indian masquerades are not even Native Americans, but only bound to remember those who died for this country early under the hands of the white Conquistadores.

Chris and I ran around all over town for Mardi Gras, but once we found the Indians, we were happy to stop and hang out with them as their private photography crewe.

A member of the Spy Boy gang told us that a week from now when the whole second line (the other side of Carnival in New Orleans–the one of the less fortunate krewe) parading will be over, the Indians will start sowing their own new masks and costumes for the next year to come. This is to give you an idea on how long of a job this is and how much guts it also takes for the people wearing it to be repressible to pick their own design and sow away. 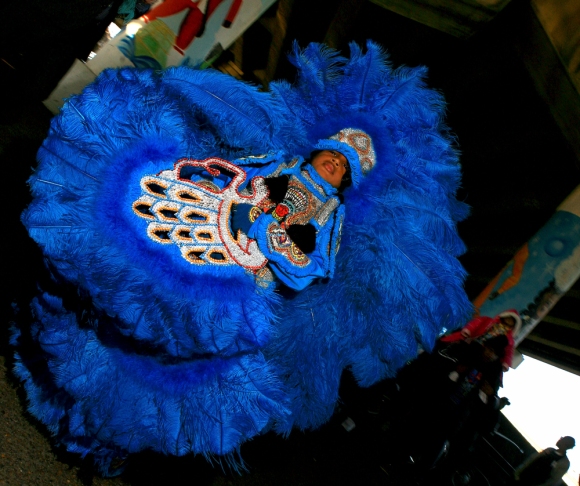 One thought on “The Mardi Gras Indians…”