“When the Saints Go Marching In…”

Today was the perfect day for Saints’ fans to be hanging out in the street of downtown New Orleans waiting for their heros to parade down. A little chilly at times, but sunny and joyfully colorful. If only our air port card would have worked better so we could have sent Chris’ photos to the New York Times sooner rather than later, I could have enjoyed the whole atmosphere a little more without stressing so much.

But it all ended well.

Chris’ photos were published on theNew York Timesonline edition and I am hopeful his last shot of Drew Bress hanging off the Saints float reaching to his fans will make it into the print section tomorrow morning.
All in all, while I am a little envious of Chris’ success (as it’s indeed normal for apprentices to look up to their mentor/master), I am also very glad I could help him getting his shots published. I know if I would have found myself if his shoes, I could not have made it by myself. The deadlines were very tight and the unavailable wireless access around town did not play in out favor. 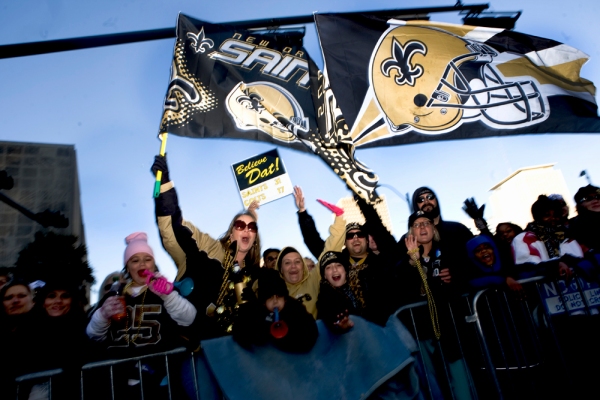 In any case, I am not so sure how, but in the space of time I was trying to upload the photos to the New York Times FTP site and then meeting Chris to go back to the house where the Internet actually worked, I could not resist the temptation of taking some photos on my own. The people were so wonderful I could not but capture their enthusiasm and happiness even if I hade to do it in 20 minutes taking very  few shots.

One thought on ““When the Saints Go Marching In…””