Jan. 17, 2010 was the day Pope Benedict XVI visited the Roman Jewish Synagogue.
Here is what happened behind the reporter curtains:

We were about 200 reporters half of which were photographers like myself and vidiographers with lens, camera bags, tripods and laptops so to fill the space of two people. We were not given any personalized invite written in golden letters, but had to sit in line for 1.5 hour waiting to be checked in and go through security for a Press Pass that granted no other access that to a room smaller than mine in D.C.

Yet, I was too excited to let this bother me as much as it was bothering the chiminey-like smokers from Reuters, AFP and CBS News. I set in line quiet and pensive. But, when time came to roll in and push my way around to find the “perfect spot” among the very few little alleys in the tiny room, I listened to nobody and set in front line with all the other big ones. 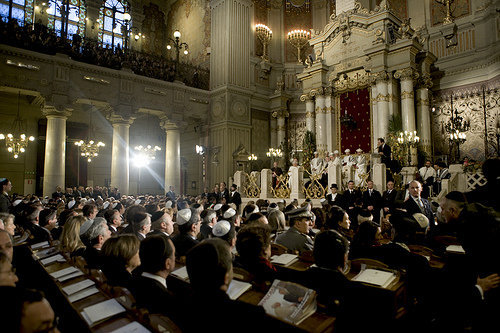 But, when the time came for the Pope and the Chief Rabbi to enter our Temple, part of me felt terrible for the reporters who were at the end of the line to ender the synagogue outside and now had no open space to set their cameras and were complaining in all languages.

Why did their assignment had became a tag of war for their survival among many more than just angry competitors, but security guards and 100-years-old marble columns blocking their views of the Pope?

So, the reporters started climbing up chairs, setting their equipment the best they could sometimes balancing with a 10kg lens on their shoulders. This was no way of working well in such important event.

Nothing I had experience before in the USA, where Press risers are set the day before and usually are efficient and quite big. But, I was in my home country, in my own synagogue where my great-grandparents had attended service for many years before they had been deported to Auschwitz, this was no time to complain about space, views or others, let alone to compete with the other reporters. I had to help them.

So, I approached a couple of photogs behind me and told them we could alternate spots and they could ask me to step in front of me when they pleased to take their shots. So we did.

Not sure this was the best way to compete in a market that is now geared in surviving mode, but I hope if I ever need to step ahead one day to take a photo of the Pope and the Roman Rabbi shaking hands after 24 years of fighting because I can’t see from where I am standing, someone will let me in after they are done too.

Yet, in the end, of of those three photographers I helped talked to me at the end of the event and told me to email her for a prospective job in her photo agency. Not too bad of a thank-you note!