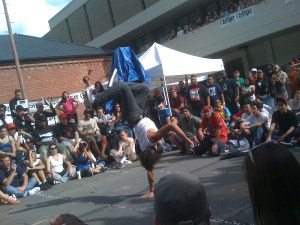 Today was the fifth annual Crafty Bastards fair organized by the Washington City Paper in Adams Morgan in Washington D.C. and also my baptism with break dance. And lets just say that  a one-hand handstand completed with a side kick pirouette on the tunes of Snoop Dogg was just too much to handle in one gulp. I thought a regular handstand in a yoga class was a hard enough move without the need for some extra pressure from a crowd of 300 plus, but today I had to revisit my theory.

Having been a yoga teacher for two years, I have thought I have seen it all from Budokon to Acro Yoga, but this I saw today might as well have been called “Yoga in a Spin” and categorized as its own discipline. The dancers were in fact not just moving to the bit of an excessively loud hip hop music, but gracefully executing some strange variations of the some of the most complicated yoga postures ever, like Peacock and Side Crow linked to acrobatics jumps and back flips. Their contorted bodies looked like a on-the-ground version of Cirque du Soleil and I am not exaggerating, but again it was only my very first break dance competition. 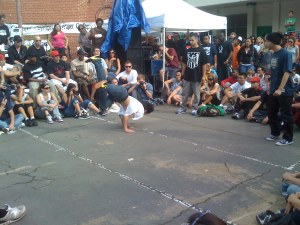 The pool of contenders counted only one girl with pink Converse and hair holding its own against an aero kicker whose legs span higher than a ballerina during a flying split in the opening scene of the Nutcracker. But the hero of the comp was a one-legged man who started off the duel by detaching his movable limb and breaking the sweat with a mono-leg routine and receiving the praising applause of an astonished audience.

But the comp couldn’t have been complete without a youngster in the gang. A 15-year-old bright red hair kid with baggy shorts and a wife beater took the scene with its quick foot and squatting action firing up the crowd and lighting up the plethora of flashes on the cameras of the uncomfortably kneeling city bloggers who to get the best head-spinning shot of their careers would contort themselves into a handstand. 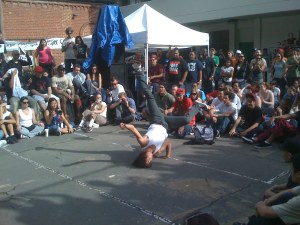 I have to say I wished I had my better camera, but I was unprepared for such colorful and picturesque show. Next time I will be sure to bring along a SLR and a couple of extra hats and knee pads and maybe if I can get a crash course in hip hop music culture and a few extra hours holding handstands in a yoga class, by next year I should be ready to participate in the competition and feel the rush of adrenaline running down my spine when my head nearly touches the ground while executing a no-arms back flip. For right now though, I feel happier I just sat down to watch the show other than trying to make a fool out of myself even though my legs were just moving on their own and calling me on stage!

Maybe next time, maybe in a hot and sweaty yoga studio with a bunch of shiny mirrors, a boom mic and stereo for an introductory class to “Yoga in a spin” brought to you by Federica Valabrega. I get first dibs on being the creator and founder! 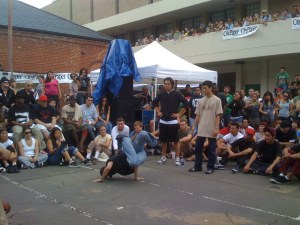 Crossing your legs in the air