Right before I finished writing this posting Troy Davis was granted a week stay by the U.S. Supreme Court that called for an extraordinary session today just few hours before Davis’s execution. Read more about it at  CNN.com

The following are some personal thoughts on the issue before I knew Davis’s was granted the stay.

–Ok, so I have shut up about this manner for way to long already, but I just cannot take it any longer…the objective journalist in me is fighting to stay calm and let things just simmer down the way they should, but this is just too unfair to not say anything about. So, the inner columnist within me is just going to come up and shout aloud now.

In my articles I usually strive to be fair and balanced, and avoid getting involved in the subject manner I cover to keep my readers interested in the topic and leaving it to them to draw the conclusion. But I cannot keep myself out of a story I wrote last April any more because the outcome of it all is just beyond my comprehension of human intelligence.

Today I want to feel sad and helpless and involved and share the pain of this death row inmate I personally interviewed inside the Jackson’s prison he has been locked up in for 17 years. Today I want to feel close to his family and I want to support what they are going through because the man I interviewed and corresponded with for five months is scheduled to be executed tonight at 7 pm despite the fact he has been claiming his innocence for over 20 years.

As a journalist I cannot make predictions, but I can show facts to speak for themselves and, having red the reports, having listen to his court hearings, having followed the story for the past few months, and having met and talked to Davis for 8 hours, facts do in fact speak for themselves: Davis is about to be executed even though there was never a weapon found on the crime scene; no trace of blood matching Davis blood type; and seven of his nine eyewitnesses have reviewed their testimonies saying they were coerced by police to state the false in identifying Davis as the killer of Savannah police officer Mark Allen MacPhail.

I am not necessarily mad. I am just VERY disappointed and really shaken up by the fact that this case is so filled with evidence supporting the theory of innocence that I do not see why many are still reluctant to believe him. Decisions to put this man or any other men to death are wrong in principle and morally and, above all, if there is any doubt still pending, just inhumane.  How can we play God and decide of others’ destiny when all we are doing is simply repeating the mistake these people have made in first place having committed a crime.  The simple fact that we are human makes us finite in our power to act flawlessly, so should we really be playing with people’s lives this way?

And no, if Davis would have killed my mother I would still not be cheering for his execution, but I would just be cheering for a better rehabilitation program in the prison he is in. Sounds cheesy and likely cliche, but I am certain I would not want to cause his family the same pain he caused me, no to mention if there is any trace of doubt he might be innocent. 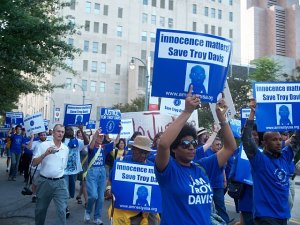 Davis has been a strong presence in my life during my graduate study at American University this year since I first learned of him from a professor at the school and later decided to write an article about him for a school assignment. Yet, I never would have imagined I would have flown to Atlanta to see him in person, share his life experience in prison for a day, and having to remember his words by heart because not allowed note pads or a recorder. That day ‘I voiced the voiceless,’ but for what final outcome I really do not know anymore? If only the power of the press was as strong as we, the journalists, believe. And I thought I could have changed his death sentence with the power of my pen.

Davis not only made me a better person aware of other perspective in life than my own, but he also made me a better journalist. His case was so interesting that I started seeking as much information as I could and became completely entrenched in the investigative aspect of the subject manner, which is what journalists should do to get the scoop and unveil facts that show the truth. I only wish my piece would have had a bigger impact and would have served to save his life.

Anyhow, one thing did make me proud: Davis’s respect for my work and my time spent with him chatting about his life in prison and his life before prison, not to mention his desire to have me visit him in person to say Goodbye to him before he was going to be put on death watch.  I was chosen, among many of his friends and family members, to go see him before his execution today. I have been debating for a couple of days if from a journalistic point of view going to go visit him was a sort of ‘getting-too-involved’ type of move. But after asking around I decided I was going to try to be simply a reporter and get the last word from the man on death row, while keeping my emotions on the side. Yet I did not really get a chance since the warden of the prison gave the order to cut the number of people allowed to visit him just before I booked my flight.

The fight is not over yet

I felt heartbroken. But maybe it is for the better, but I did not get a chance to say ARRIVEDERCI.

And so I guess this post is a way to say farewell to Troy. I am saying this with a sour taste in my mouth, but also with the hope this execution will turn out to teach us something else about being human and powerless when it comes to decide about other human lives, which only God should be in charge of taking away when time comes.

SOME INTERESTING LINKS REGARDING DAVIS: